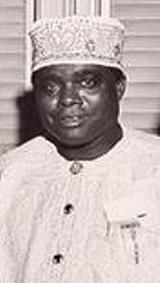 Jaja Anucha Wachuku (1 January 1918 – 7 November 1996), a Royal Prince of Ngwaland, “descendant of 20 generations of African chiefs in the Igbo country of Eastern Nigeria,” was a Pan-Africanist, and a Nigerian statesman, lawyer, politician, diplomat and humanitarian. He was the first Speaker of the Nigerian House of Representatives; as well as first Nigerian Ambassador and Permanent Representative to the United Nations. Also, Wachuku was the first Nigerian Minister for Foreign Affairs.

At a time when the United States government had already listed Nelson Mandela as a terrorist, Jaja Wachuku, who was “widely respected” as Foreign Affairs Minister of Nigeria intervened with the South African government and helped save Nelson Mandela and others from the death penalty at the 1963–64 Rivonia Trial. In his 1962 diary, from Lagos: Nigeria, Nelson Mandela wrote: “Friday 18 May 1962: 1pm: OR and I meet Mr. Jaja Wachuku and his staff and have a profitable discussion. Saturday 19 May 1962: We have lunch with Jaja Wachuku.”

On Thursday 30 September 2010, President Goodluck Jonathan of Nigeria conferred on Wachuku a posthumous special Golden Jubilee Independence Anniversary Award for his outstanding contributions towards the development of Nigeria. Also, for the 1 January 2014 100-year anniversary of Nigeria, having been nominated for exceptional recognition by the Presidential Committee on the Centenary Celebrations, Wachuku was, on Friday 28 February 2014, honoured as a Hero of the Struggle for Nigeria’s Independence from Great Britain and a Pioneer Political Leader by President Goodluck Jonathan.