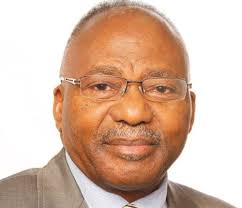 Peter Hitjitevi Katjavivi (born 12 May 1941) is a Namibian politician who is the Speaker of the National Assembly of Namibia and the chancellor of the Namibia University of Science and Technology. Previously he was the founding Vice-Chancellor of the University of Namibia from 1992 to 2003, Ambassador to the European Union from 2003 to 2006, Ambassador to Germany from 2006 to 2008, and Director General of the National Planning Commission from 2008 to 2010.

Peter Katjavivi was born in Okahandja and attended a primary school in Windhoek, then the Augustineum Secondary School in Okahandja (1960–61) and the Government College Umuahia, Nigeria (1963-1966). In 1966/67 he began studying history, law and political science at the University of Dar es Salaam, Tanzania. Katjavivi joined SWAPO in the 1960s and was head of SWAPO’s overseas offices in London. In 1986 he obtained a doctorate (DPhil) at St Antony’s College, Oxford.

In 1989 he was a member of the Constituent Assembly of Namibia. From 1992 to 2003 he was Vice-Chancellor of the University of Namibia, at the foundation of which he had significant influence. Katjavivi was a member of numerous national and international educational, cultural and research organizations, serving as President of the Namibia Economic Policy Research Unit beginning in 1990, as Chairman of the Council of National Monuments (now the National Heritage Council of Namibia) from 1992 to 2000, and as an Executive Council Member of UNESCO from 1993 to 1997. From 2003 to 2006 he was Namibia’s Ambassador to the European Union in Brussels, and from 2006 to 2008 he was Ambassador to Germany. He was appointed as Director-General of the National Planning Commission on 8 April 2008.